Is the SEC Sending a Big Hint With Its Latest Penny Stock Suspension? 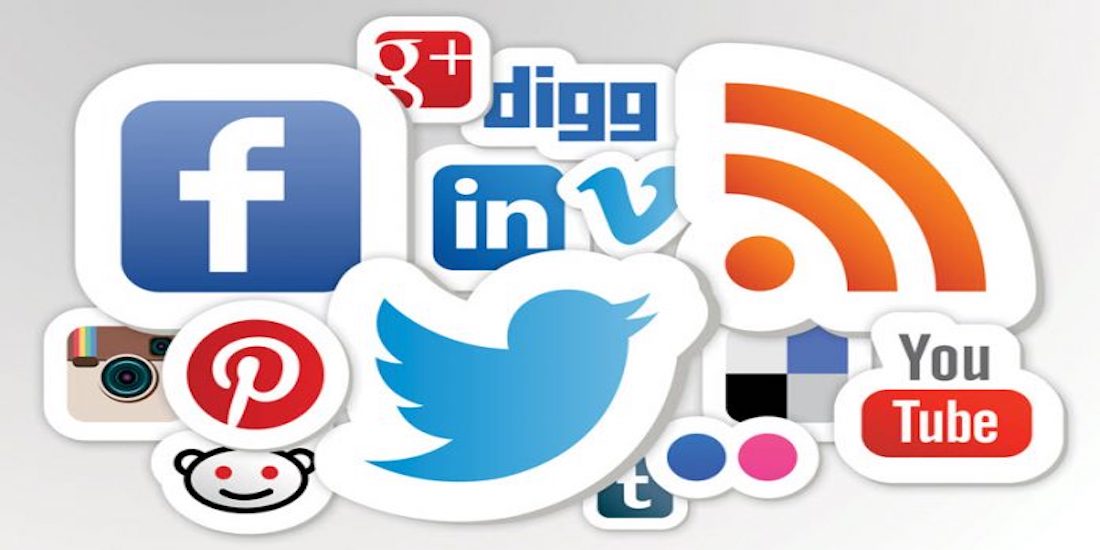 At the open of the trading session on February 11th, The Securities and Exchange Commission (the “SEC”) suspended trading in SpectraScience Inc (SCIE).

On the surface, the suspension seems pretty typical — a penny stock that was suspended because of “questions regarding the accuracy and adequacy of information about the Company in the market place and potentially manipulative trading activity.”

It’s the exact verbiage that appears in nearly every suspension order against penny stocks (after all, the penny stock market is full of stocks with questionable business operations, spotty public disclosures, and manipulative trading activity). But if we dig a little deeper, this suspension might not be so typical after all. In fact, it could be a precursor for a significant change in focus for the SEC to try to clean up a marketplace that has gone off the rails lately with an unprecedented amount of manipulative trading activity through the influence of Social Media.

For months, SCIE was a rarely traded stock sitting at $.0001/share. It had done no news or filings since 2017. Its website and phone number were both dead. After failing to pay its annual business taxes, the business was administratively dissolved by the Minnesota Secretary of State.  By all measures, SCIE was a zombie stock that still publicly traded despite having no active business operations.

Then, like so many other dead penny stocks over the past few months, social media pumpers and chat room groups took an interest in SCIE because of the low price. On December 4, 2020, after months of no trading activity, SCIE saw a little over 2 billion shares traded between $.0001/share – $.0003/share. The dead stock had officially become a social media frenzy. 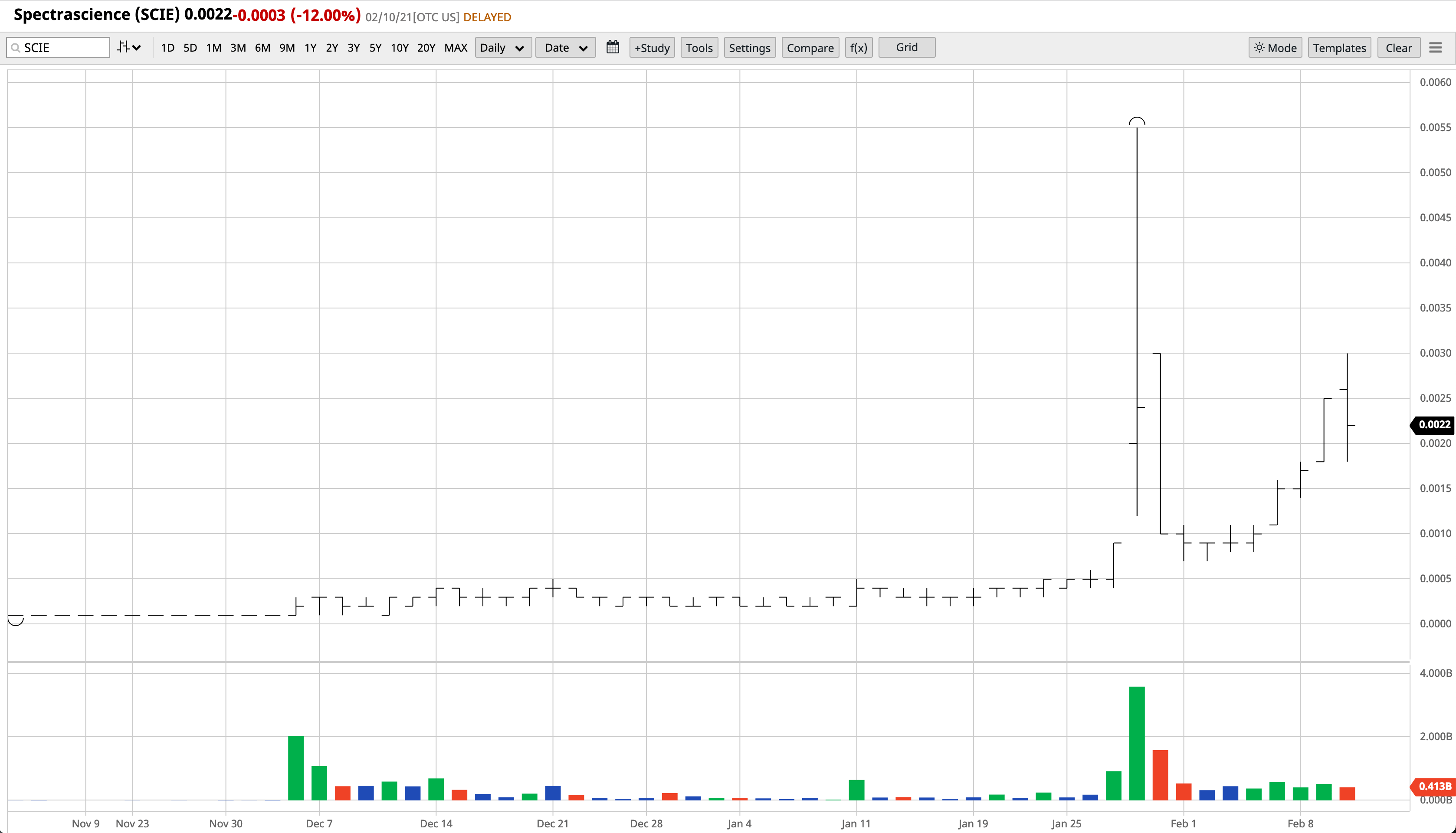 The meteoric rise of 5,500% from $.0001/share at its peak and 2,200% gains at the time of the suspension have become all too common in today’s market. And with it, so has attention for similar stocks like SCIE (long dead stocks trading at a very low price).

Money and attention are now flowing into penny stocks like no time ever before. And since the penny stock market is a largely unregulated market full of stocks that provide little to no public disclosures, including many that have been dead for years, it provides the opportunity for wild price swings through market manipulation.

These points have been catching the attention of mainstream media and may now have the SEC’s attention and focus like never before.

The SEC highlighted 4 reasons for the suspension in the SCIE Suspension Order. Besides the generic “questions regarding the accuracy and adequacy of information about the company in the marketplace and potentially manipulative trading activity” statement, the SEC added 4 more critical points.

(a) SCIE’s delinquency in its periodic filings with the Commission, having not filed any periodic reports since November 2017, having failed to file any quarterly reports for the first, second or third quarters of 2018, 2019and 2020;

(b) SCIE’s phone number and website, listed on its profile page on OTC Markets, are non-working;

(c) since late January 2021, certain social media accounts may be engaged in a coordinated attempt to artificially influence SCIE’s share price; and

(d) since late January 2021, SCIE’s share price and trading volume have increased in the absence of any publicly available news from the company.

Section A is nothing new. The SEC suspends SEC filers that are delinquent in their reporting obligations quite often. But unlike in the past, the suspension order was not accompanied by a motion to revoke the stock. That tells us that the Issuer’s delinquency was probably not the SEC’s primary focus.

Section B is something less common. The SEC pointed out that SCIE is an inactive company without a working website or phone number.

Section C is also something atypical. The SEC pointed out that the coordinated effort of social media accounts to pump the SCIE share price was a driving force in their decision to suspend that stock.

Section D drives home the same point made in Sections B and C. SCIE had no news or events related to their business to justify the increase in the volume and price.

First, it’s important to point out that the SEC does not do press releases for all Suspension Orders. In fact, it rarely does press releases unless they are making a point about the suspension. For example, when the SEC was focused on Covid-19 scams, they did press releases to point out when they shut down some Covid scams. In the past, the same strategy was used when there was a focus on cryptocurrency scams, cannabis stock scams, etc.

The SEC makes it very clear that two things above all else motivated the SEC to suspend SCIE:

The press release goes on to drive home the point from the headline:

The Securities and Exchange Commission today suspended trading in an inactive company amid questions surrounding online promotion of the company’s securities and recent trading activity.

The SEC’s trading suspension order states that since late January 2021, certain social media accounts may be engaged in a coordinated attempt to artificially influence the share price of SpectraScience Inc. (OTC: SCIE), an inactive Minnesota-based corporation. The order further states that during the same period, the share price and trading volume of SpectraScience shares increased even though there was no publicly available news from the company.

The SEC’s order also states that SpectraScience is delinquent in its reporting, having not filed any periodic reports since 2017, and that its most recent website and phone number are non-functional.

The Warning Shot (The Investor Alert)

The SEC put out an investor alert on January 30, 2021, warning of  the “risks of trading based on social media.”

Retail investors may seek to profit from volatile markets by buying individual stock, including stock in heavily-promoted companies with smaller market capitalizations. Some of these stocks may be discussed in social media, news aggregators, investment research websites, online investment newsletters, ratings websites, message boards, chat rooms, and discussion forums. It can be tempting to jump on the bandwagon and follow whatever the crowd seems to be doing.  Sometimes, however, following the crowd may lead to significant investment losses.

This tells us that the SCIE suspension was not a random event. The SEC warned us suspensions like this were coming.

They did the same thing at the front end of a slew of COVID-19 suspensions.

The SEC  held a special meeting on Thursday, February 11th, and they have another special meeting scheduled for Thursday, February 18th. These meetings are in addition to their regular weekly Tuesday meetings.  The meetings are closed to the public, and no details are available, but they are filed under “Matters relating to examinations and enforcement proceedings.” At the very least, the timing is interesting.

Any time a market space heats up, it opens the door for increased market manipulation and securities fraud. The more fraud, the more chance that investors could be harmed. It’s the SEC’s duty to reduce fraud and protect investors. The SEC has obviously flagged social media manipulation of inactive Issuers as an area of investor concern.

To us, all of these breadcrumbs taken together looks like a big clue that we could see a bunch more SEC suspensions in the coming days and weeks similar to the SCIE suspension — Inactive Issuers being touted on Social Media.

If this is the case, time will tell whether the SEC sticks to only delinquent filers being pumped on Social Media, or, once they have a sound system in place to track social media pumps, they also eventually turn their attention to all defunct penny stocks being manipulated through Social Media using unverifiable information.