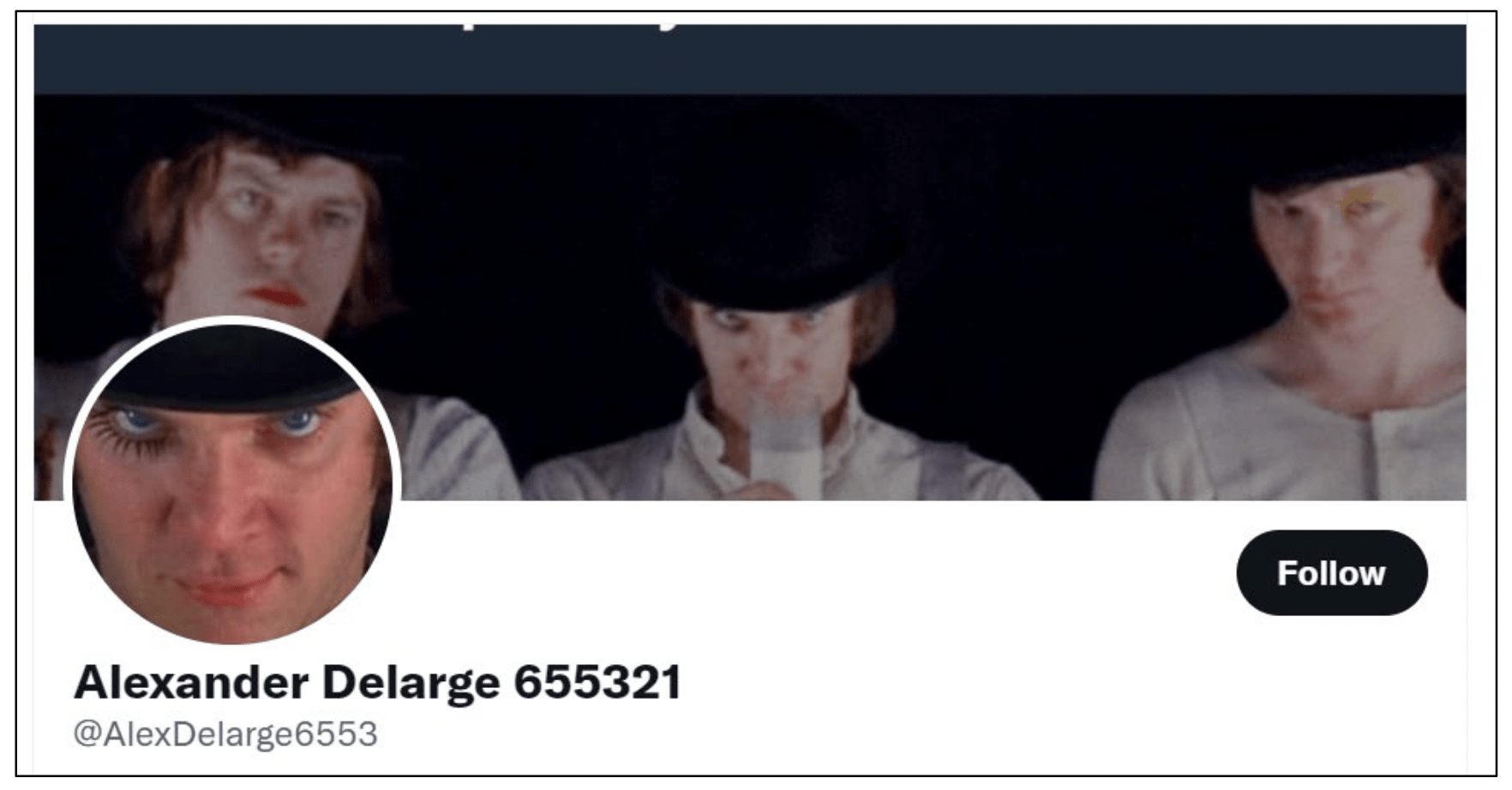 According to the Complaint filed in Manhattan federal court, Gallagher created a stock promotion account on Twitter using the alias “Alex DeLarge,” in September 2019 based on a character from the Anthony Burgess novel A Clockwork Orange and the Stanley Kubrick film of the same name @AlexDelarge6553.

The account was used to make thousands of tweets touting certain over-the-counter penny stocks and to disseminate false and misleading information about Gallagher’s trading in those stocks in order to induce his followers to purchase those stocks and drive up their prices. As alleged, Gallagher would then sell those stocks at the inflated prices without disclosing his sales.

The 41-page Complaint details how Gallagher would secretly accumulate large blocks of stocks in the target companies in tandem with some other traders then began pumping the stocks using dozens of misleading tweets.

Besides making false statements about the operations of the target companies (some of which were defunct with no operations), Gallagher would encourage his followers to buy while claiming to be buying more too, when in reality, he was selling stock —never disclosing those sales.

Essentially, Gallagher turned lies into profits by engaging in a pump and dump scheme, where he and others manipulated the price of penny stocks, defrauding ordinary investors for their own financial gain.

During the latter half of January, while Gallagher actively touted the stock using dozens of tweets containing false claims about the companies operations, the stock rose over 300%. During this time, Gallagher sold nearly his entire holdings while claiming to be adding more stock daily to his Twitter followers. 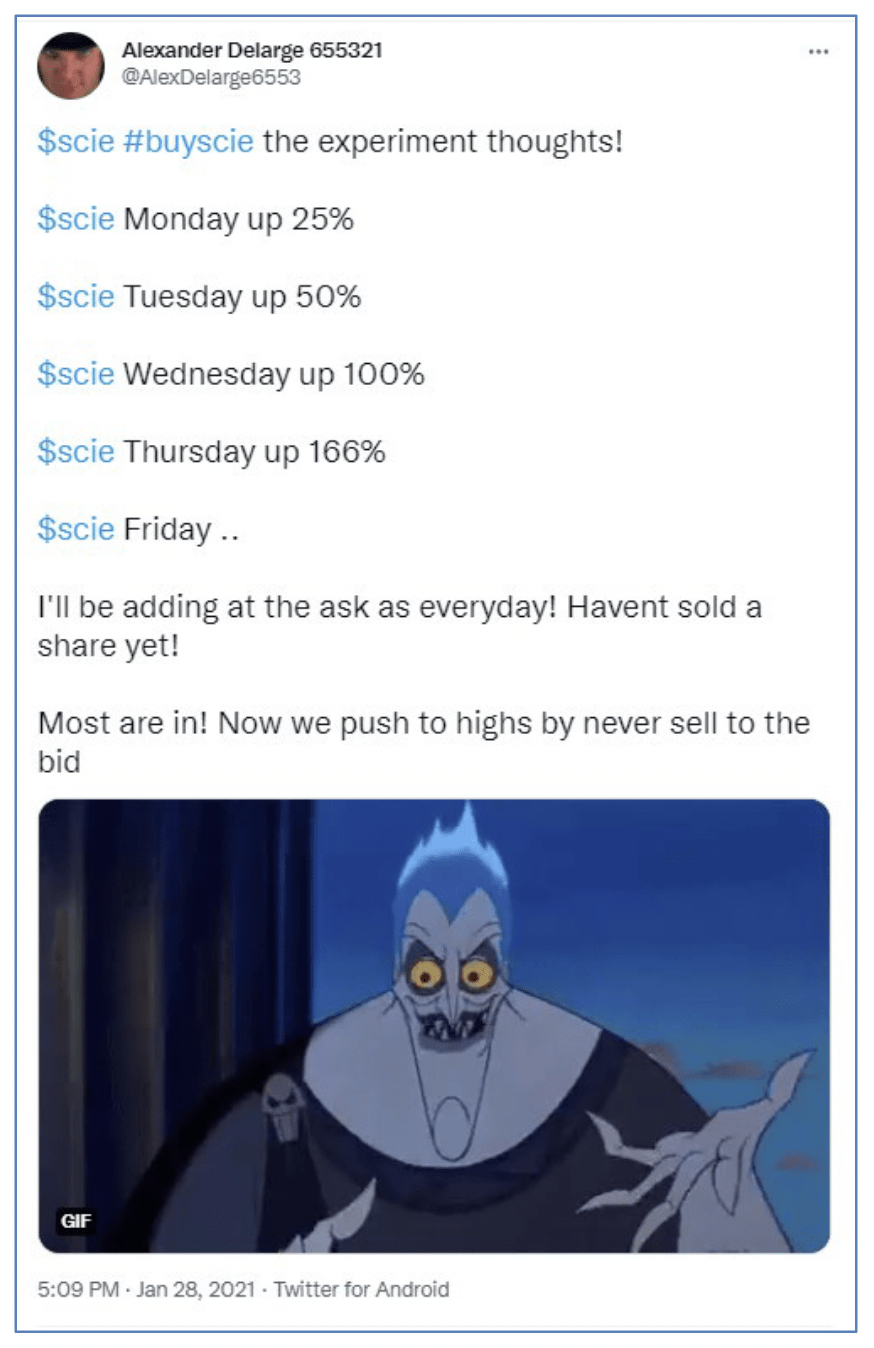 SCIE was suspended by the SEC on February 11, 2021, for “questions regarding the accuracy and adequacy of information about the Company in the marketplace and potentially manipulative trading activity.” The suspension had a feeling that bigger things were going to come from it, sparking us to write about it at that time.

Gallagher first began accumulating SPOM on February 16, 2021, at prices between $.16 and $.19 per share. By August 3, 2021, Gallagher had accumulated more than 1.6 million shares. During the period of accumulation, Gallagher made more than 130 tweets touting SPOM.

From August 3, 2021, through September 15, 2021, Gallagher sold approximately 1.3 million shares while misleading other investors by suggesting in tweets that he wasn’t selling any shares but was instead buying and encouraging others to continue to load more shares. 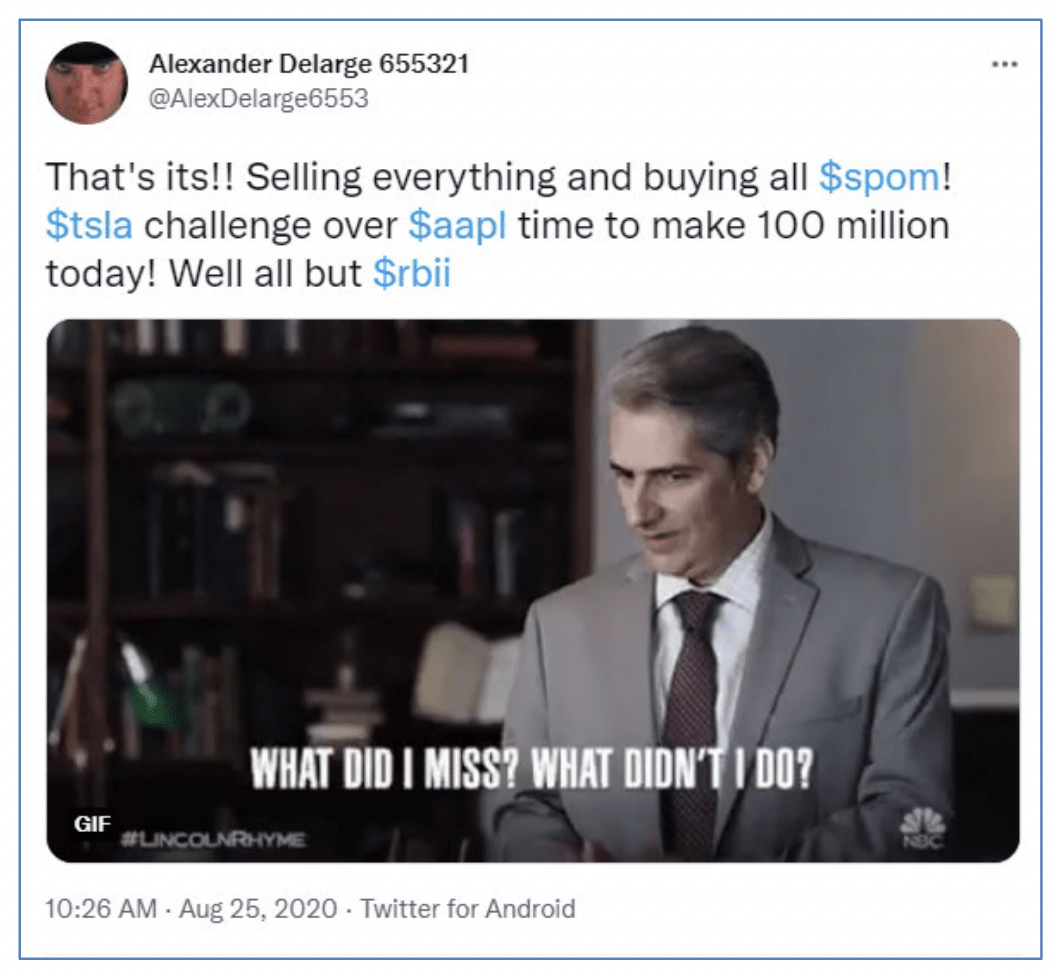 Of note, the Complaint also mentions that Gallagher was warned on at least two occasions by his broker for “manipulative trading” because Gallagher was executing bids on SPOM near the close in what appeared to be an attempt to “uptick” the closing price or “mark the close.”

Beginning on or about January 14, 2021, through about March 11, 2021, Gallagher sold approximately 109,080 shares, but during that same period, he continued to make tweets touting ALPP as a strong buy, including tweets misrepresenting his true holdings.

Gallagher began acquiring shares of HMBL (then known as Tesoro Enterprises (TSNP)) on or about November 10, 2020, at $.0017/share.  He immediately began putting out tweets touting the stock, giving daily updates about the value of his holdings growing, and telling others that TSNP was a HOLD and would hit $1.

But despite his promises to HOLD the stock, Gallagher sold all of his holdings on November 17, 2020, for a substantial profit at between $.0244 and $.0245 per share. While Gallagher was selling, he made misleading tweets showing he was still holding all of his shares and claiming that he was adding more. 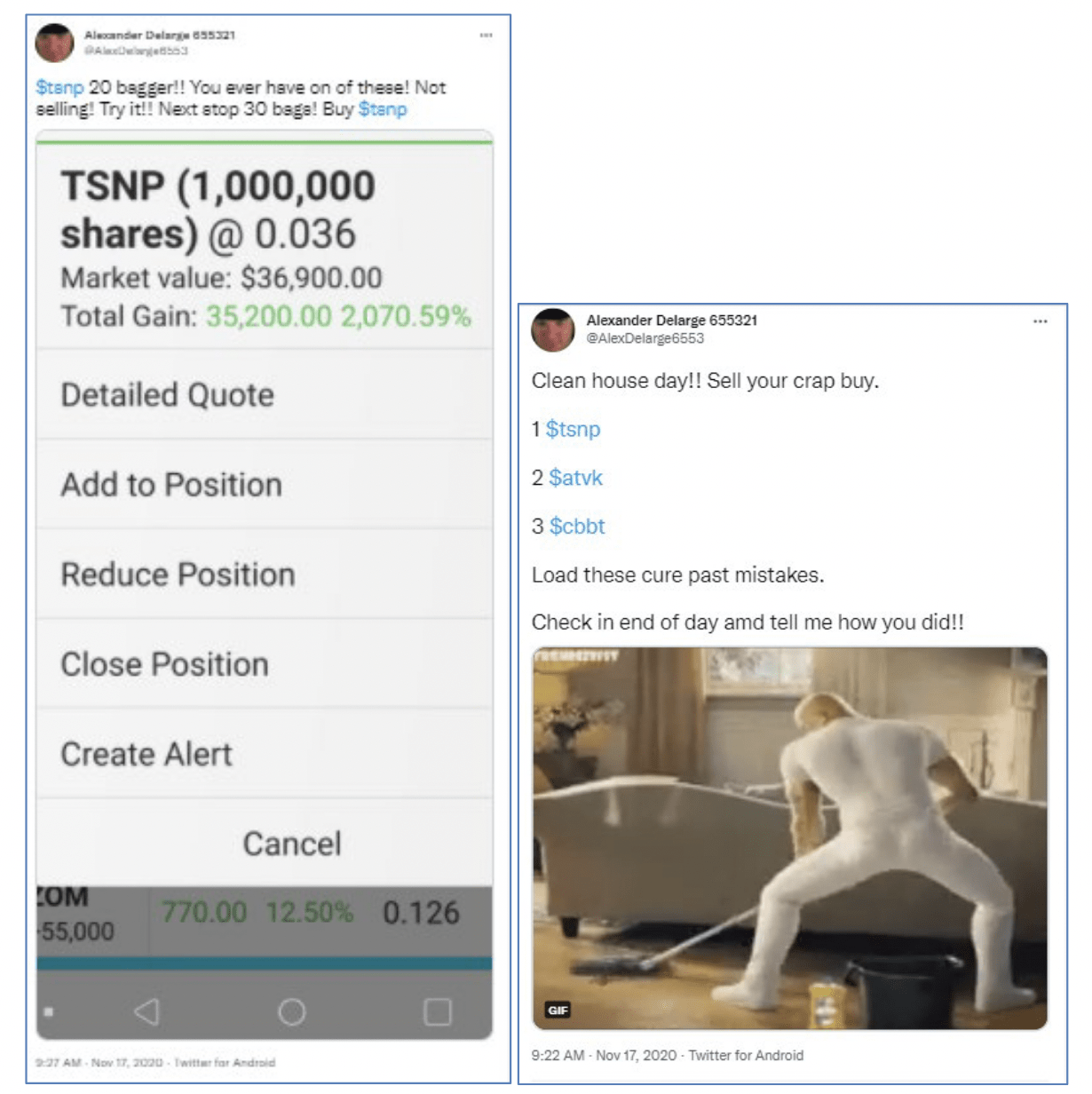 Over the next few months, Gallagher continued to buy and sell TSNP, all without ever properly disclosing when he was selling and while continuing to mislead his Twitter followers.

During this period, Gallagher disseminated several tweets touting ENZC, including the following:

Beginning on September 16, 2020, and continuing through September 25, 2020, Gallagher sold approximately 6.5 million of his 7 million shares, but during that time, he continued to issue tweets touting ENZC and encouraging others to buy without disclosing he was not buying himself, but rather selling.

On August 13, 2020, Gallagher began selling his position. That day, he sold approximately one million shares at $.0044 per share. The following day when asked about his thoughts on INQD, Gallagher responded that it was a “long hold!” and that he still had all of his 3 million shares, despite having already sold one million shares.

Later in February of 2021, when the stock price hit new highs, Gallagher renewed his stock pumping, saying he never sold a share. During this time, Gallagher sold the rest of his holdings while simultaneously tweeting that INQD was a long-term hold.

All total, the Complaint alleges that Gallagher made more than $1 million in trading profits through the above-mentioned pump and dump schemes.

Gallagher is also facing charges from the Securities and Exchange Commission (the “SEC”), which announced on Tuesday that it filed an emergency action, and obtained an injunction and asset freeze, against Gallagher for allegedly committing securities fraud through a long-running scheme to manipulate stocks using Twitter.

The SEC’s Complaint, filed in the U.S. District Court for the Southern District of New York, charges Gallagher with violating the antifraud provisions of the federal securities laws. The complaint seeks, among other relief, a permanent injunction, disgorgement, prejudgment interest, civil penalties, and the asset freeze granted by the court.

The Complaint includes a list of 60 issuers, from which Gallagher profited approximately $3,394,970.19 through stock scalping (recommending that others buy the stock while selling). 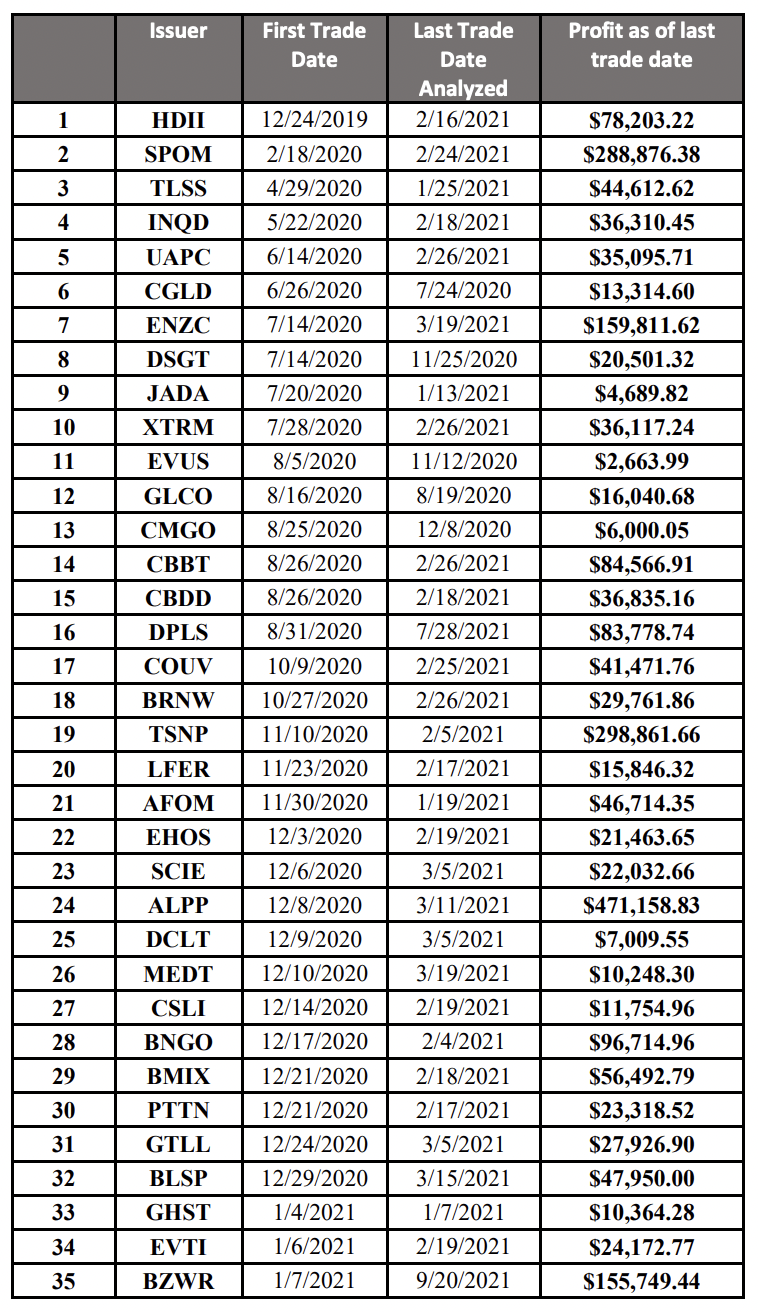 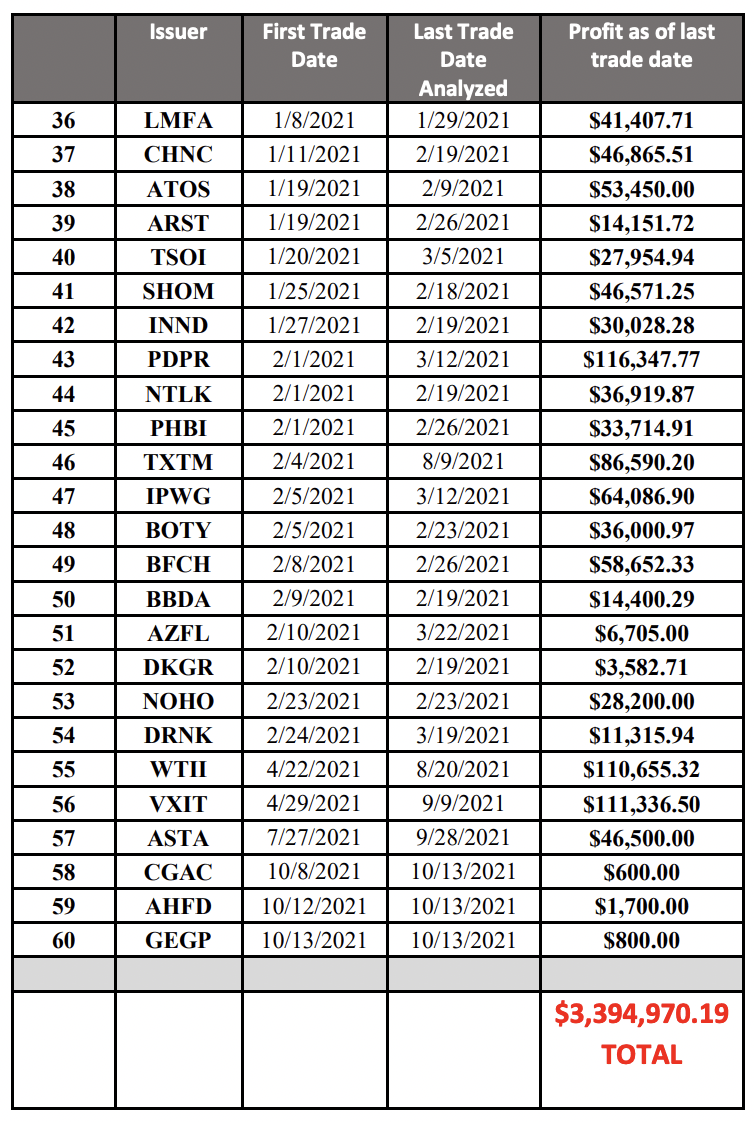