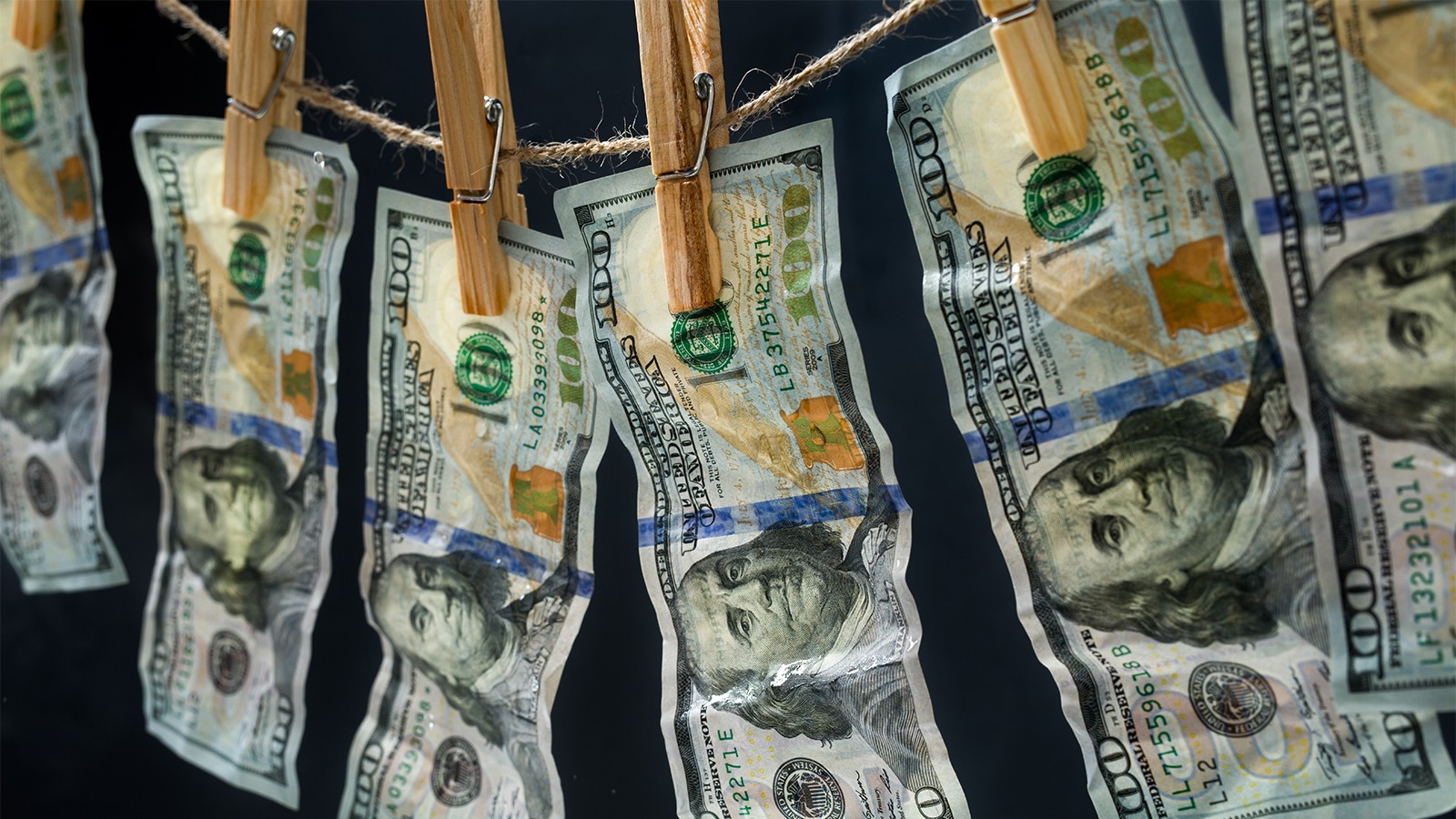 On Thursday, December 9th, three more Canadian citizens were charged by the Securities and Exchange Commission as part of what has been described as a long-running global pump and dump scheme that collectively generated over a billion dollars from unlawful stock sales.

According to the SEC’s complaint, between at least 2011 and 2016, Jay Scott Kirk Lee, Geoffrey Allen Wall, and Benjamin Thompson Kirk allegedly were able to utilize a network of offshore front companies to conceal their control of shares in penny stocks, unload those shares on unsuspecting retail investors, and disburse the proceeds of their fraud to various bank accounts throughout the world.

The SEC’s complaint further alleges that Canadian resident Frederick L. Sharp masterminded a complex scheme from 2011 to 2019 in which he and his associates – Canadian residents Zhiying Yvonne Gasarch and Courtney Kelln – enabled control persons of microcap companies whose stock was publicly traded in the U.S. securities markets to conceal their control and ownership of huge amounts of penny stocks.  They then surreptitiously dumped the stock into the U.S. markets in violation of federal securities laws.

The services Sharp and his associates allegedly provided included furnishing networks of offshore shell companies to conceal stock ownership, arranging stock transfers and money transmittals, and providing encrypted accounting and communications systems.  According to the complaint, Sharp and his associates facilitated over a billion dollars in gross sales in hundreds of penny stock companies.

Using paid promotions, including boiler room operations by now-defunct Brighton Markets, the Kirk group made over $77 million in profits from the stocks mentioned above: 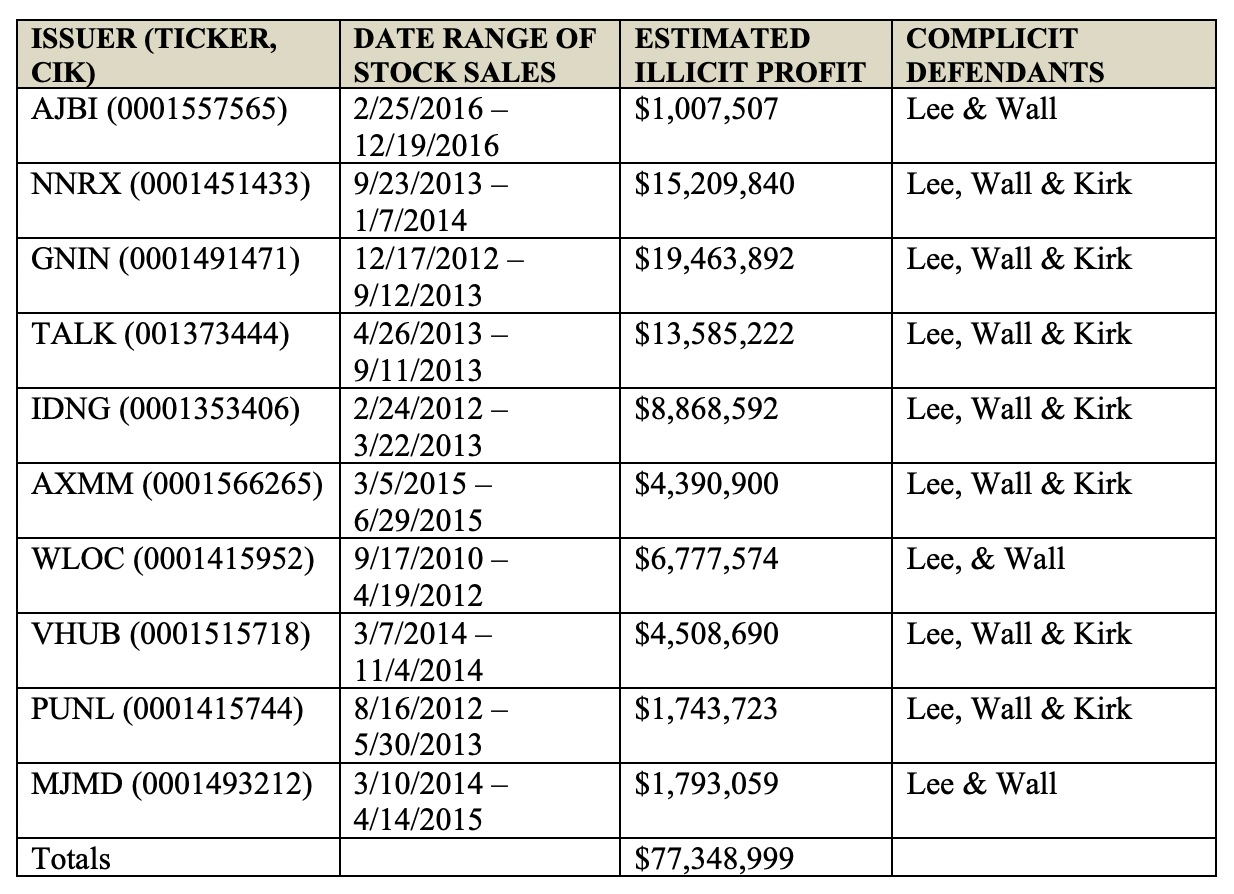 Frederick L Sharp, the alleged mastermind of the scheme, was charged by the SEC on August 5, 2021, along with 8 other individuals.

In parallel proceedings, on August 4, 2021, the US Attorney for the District of Massachusetts charged Sharp, Kelln, Veldhuis, and Luis Carrillo for conspiracy to commit securities fraud and securities fraud. Read the FBI Affidavit in support for Sharp et al. here.

Arrest warrants were issued for Sharp, Veldhuis, Kelln, and Carrillo, but all four individuals remain fugitives.

This SEC complaint ties together SEC enforcement actions against several other people involved in the penny stock markets, including:

The most significant bust was, without a doubt, that of Roger Knox, head of an offshore money organization in Switzerland that often worked under the direction of Frederick Sharp. Knox, along with several of his associates, including Morrie Tobin, Milan Patel, Matthew Ledvina, Kenneth Ciapala, and Ulrik Debo, were criminally charged in a series of indictments between 2018 – 2019.

According to the SEC and Criminal complaints, Knox illegally sold stock through Silverton SA (later renamed to Wintercap SA) for a single control group using nominee shareholders (fake shareholders that held the stock in name only) for more than 100 different publicly traded companies allowing those secret control groups to suck over $164 million out of the market illegally since June 2015.

But Knox wasn’t the leader in this operation. He was one of many working under the instructions of Frederick Sharp. The SEC charges against Frederick Sharp make it clear that Sharp arranged for his clients to deposit stock in Silverton/WinterCap (Roger Knox) and Blacklight SA (Kenneth Ciapala) to obfuscate the control persons’ association with their public company stock.

And according to the criminal complaint against Sharp, cooperating witnesses against him include the founder, owner, and chief executive of an asset management firm based in Switzerland and another individual from that asset management firm, each of whom was previously criminally charged and already pleaded guilty, making the Knox bust a key step in eventually bringing charges against Sharp.

In 1995, Sharp was suspended from practicing law in B.C. for one year after he admitted to professional misconduct for “knowingly taking instructions” from a director disqualified “because of a criminal record for fraud.”

After his suspension, Sharp never rejoined the B.C. Law Society.

According to testimony given to the FBI by Kevan Garner during Operation Bermuda Short (an FBI sting set up to catch individuals using penny stocks for illegal kickback and pump and dump activities in the early 2000s), Sharp was using Virgilio Santana Ripoll (HE Capital SA) of the Dominican Republic and Keith King and Cliff Wilkins (FN Group/First Nevisian Stockbrokers Ltd) in Nevis to offer money laundering and tax haven services for people looking to hide their money offshore to avoid paying taxes or avoid detection from the authorities.

Ripoll remained a partner with Sharp until at least 2019 and can be found in SEC filings, involved setting up several S-1 shell companies in the Dominican Republic and other parts of Central America that were later used for pump and dump activities.

Sharp once again came under scrutiny in 2016 when documents leaked from the law firm Mossack Fonseca known as the “Panama Papers” showed that Sharp helped register 1,167 offshore entities from his Vancouver office, operating as the middle man for several fraudsters, including Mike Milton and penny stock promoter Eric Van Nguyen (criminally charged in 2014 but never arrested).  Sharp had been Mossack Fonseca’s Canadian representative since 1994.

The James Bond of Tax Evasion

When it comes to tax evasion, Frederick Sharp appears to consider himself the authority on the matter.

Sharp once wrote a book about offshore entities and tax evasion (later made into a short film produced by Sharp), and according to SEC court records, Sharp’s entire operation centers around a James Bond theme:

The SEC alleges that Sharp and associates employed the use of cellular phones called “xPhones”, which operated on an encrypted network called Threema. The encrypted communications and Q were hosted on servers in Curaçao because Sharp believed that Curaçao was beyond the reach of US law enforcement.

Luis Carrillo and Benjamin Kirk (two of Frederick Sharp’s top clients) were previously charged together by SEC in 2013 for their roles in a pump and dump scheme involving Pacific Blue Energy Corp and Tradeshow Marketing Company Ltd.

Even now, with criminal charges and arrest warrants issued against them and several members of the Swiss money-laundering group behind bars, Carrillo and Sharp are on the loose and possibly running new operations in other parts of the globe while profiting off illegal market manipulation schemes.

According to the latest information, Frederick Sharp has gone missing. His wife, Theresa Sharp, refused service through an email address linked to Sharp, and attempts to serve him in person at his West Vancouver home through the Hague Convention have come up empty.

Both the United States Department of Justice and the SEC are now proceeding with default judgments against him.