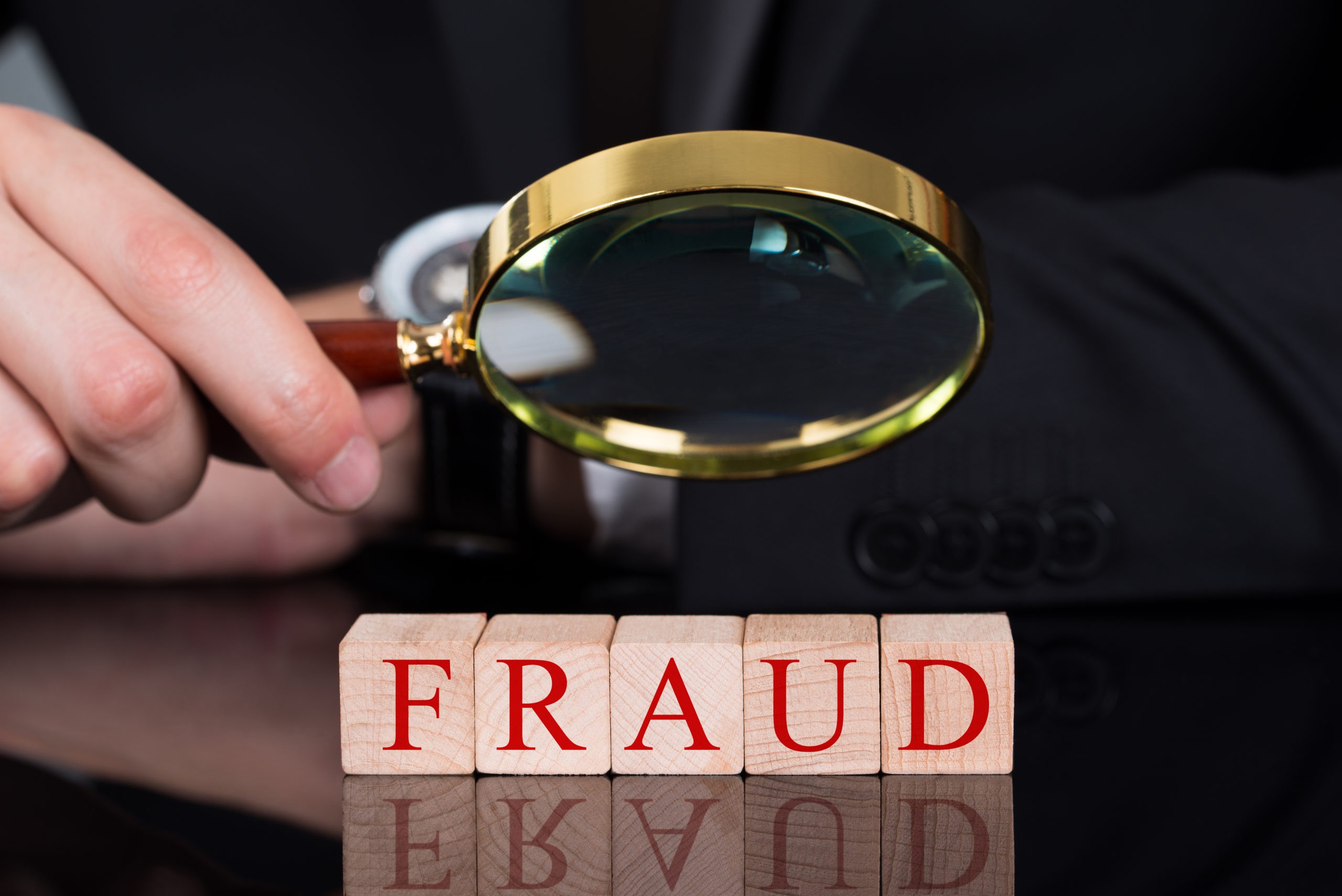 On March 15, 2022, the Securities and Exchange Commission (the “SEC”) announced charges against five individuals for allegedly operating a call center in Medellin, Colombia, which used high-pressure sales tactics and made false and misleading statements to retail investors to convince them to buy the stocks of small companies trading in the U.S. markets.

Defendant Francis Biller had previously pled guilty to four counts of theft and fraud in British Columbia in 2005 in connection with an investment fraud run through Eron Mortgage Corporation. In 1999, Eron Mortgage and its key executives perpetrated one of the biggest swindles in Canadian history. The British Columbia Securities Commission estimated that 3,200 investors, most of them from B.C., lost C$ 170 million. Biller was sentenced to three years in prison and was permanently banned by the Ontario Securities Commission (OSC).

During the Relevant Period, Defendants’ boiler room promoted the stock of at least 18 issuers, in coordination with control groups who were dumping their shares of those issuers. The demand created by Defendants’ misleading promotions enabled control groups to sell millions of shares of stock, which generated over $58 million in trading proceeds for the control groups. The stock of many of these issuers was thinly traded in the market when it was not being touted in one of the Defendants’ promotional campaigns, so investors who purchased these shares at Defendants’ urging often had difficulty finding buyers when trying to sell their shares once Defendants’ promotions were over.

To promote these issuers’ shares, Defendants pretended to be affiliated with various non-existent financial advisory firms, making up legitimate-sounding names for these phony financial advisory firms and creating legitimate-looking websites for them. When making telephone calls, Defendants routinely used spoofed phone numbers to show area codes that made it appear as if they were calling from the United States rather than Colombia. When calling and emailing unsuspecting investors, Defendants also used false names, made false or misleading statements about the prospects of the companies whose stock they were touting, and failed to disclose that they were acting in coordination with control groups that were dumping their securities into the market.

According to the SEC, in the spring of 2018, Biller and Dove were looking for a new source of clients who had stock that could be promoted by their boiler room. Dove had previously partnered with an individual (referred to as “Person A”) in a number of other pump and dump deals. In the spring of 2018, Person A introduced the Defendants to an individual (“Person B”) who purported to be looking for a boiler room to promote several issuers’ stocks. Unbeknownst to Person A and the Defendants, Person B was working in an undercover capacity with law enforcement officials and recorded his communications with Person A and the Defendants.

The defendants also made ommissions about the control groups they worked for, specifically detailing the Oroplata Resources Corp Inc (ORRP), PureSnax International Inc (PSNX), and Garmatex Holdings Ltd (GRMX) deals, all of which involved a control group led by Luis Carrillo.

According to the SEC, the Luis Carrillo control group owned 100% of the Oroplata float in 2016, dividing the Oroplata float into at last 7 nominee foreign entities, each of which controlled less than 5% of the O/S to avoid reporting requirements.  From on or about June 6, 2016, through at least September 2016, Defendants’ boiler room promoted Oroplata stock. At that time, Defendants were using the names Market Wi$e Report or Winford Report for their phony investor relations firm. 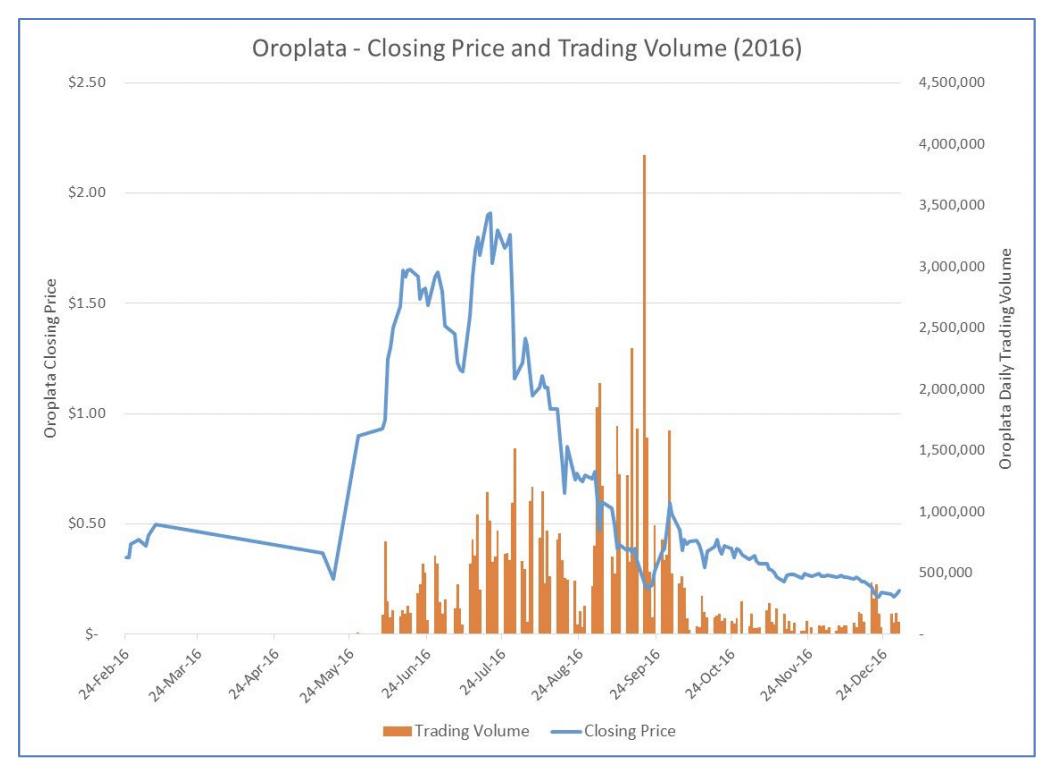 During Defendants’ promotion of Oroplata between June 6 and August 15, 2016, the price of the stock ranged from $0.93 to $1.91. By the end of September 2016, the stock’s price had dropped to $0.545, and the price continued to fall, trading in a range between $0.10 and $0.20 per share into 2017 and eventually dropping below that. Investors who purchased Oroplata on the Defendants’ urging and held their shares lost significant sums of money.

According to the SEC, the Luis Carrillo control group also controlled 100% of the PureSnax float during the stock promotion, dividing the PureSnax stock into blocks of less than 5% of PureSnax’s total number of shares outstanding and transferring the ownership of those blocks of stock to foreign nominee entities, so each nominee owned, on paper, less than 5% of PureSnax’s shares. 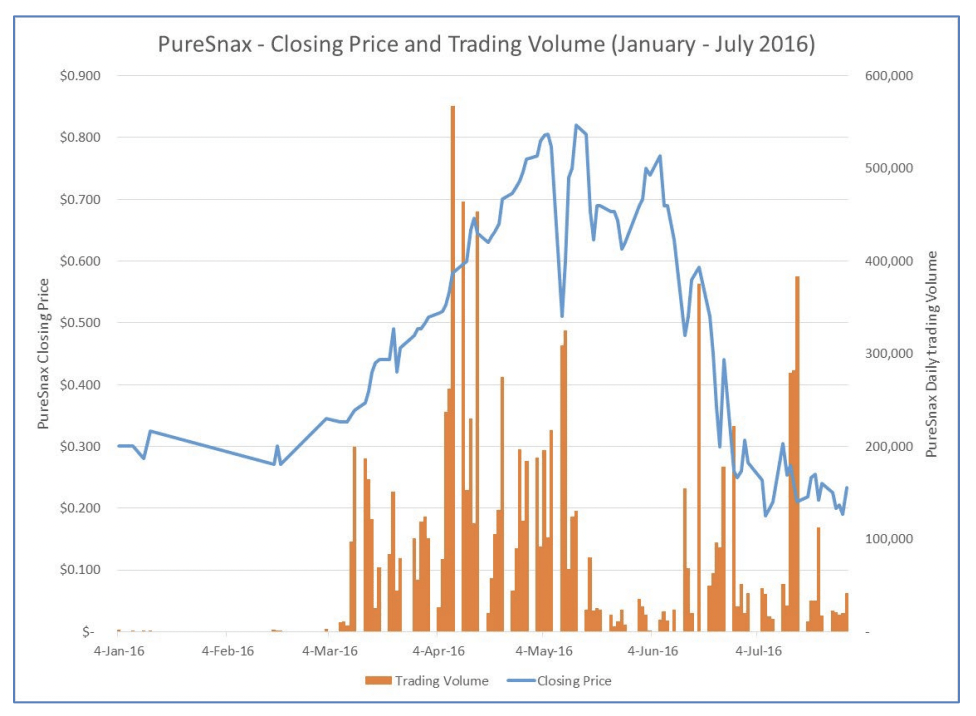 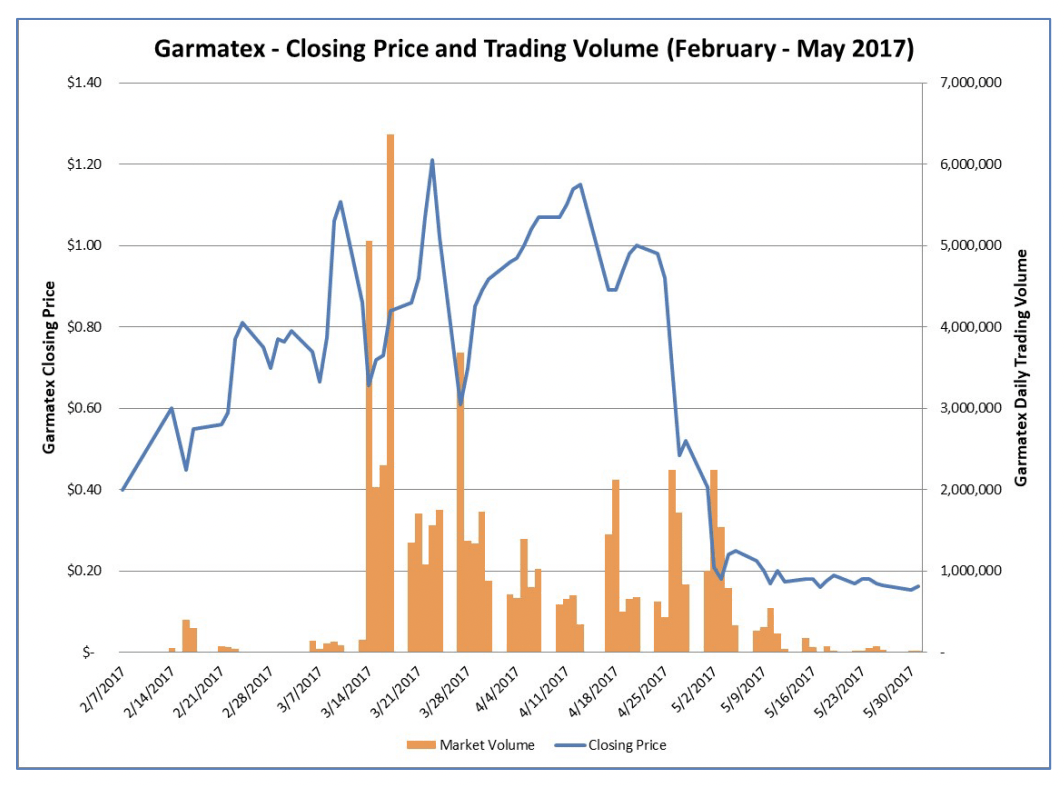 Garmatex did a reverse split in February 2018 and became Evolution Blockchain Group Inc (EVBC). The stock was suspended by the SEC on July 10, 2018.

According to the SEC, the control groups sold their stock through brokerage accounts maintained by at least three fraudulent trading platforms: Wintercap SA (“Wintercap”), Blacklight SA (“Blacklight”) and the Bajic-Taneja Platform (collectively, the “Foreign Platforms”). 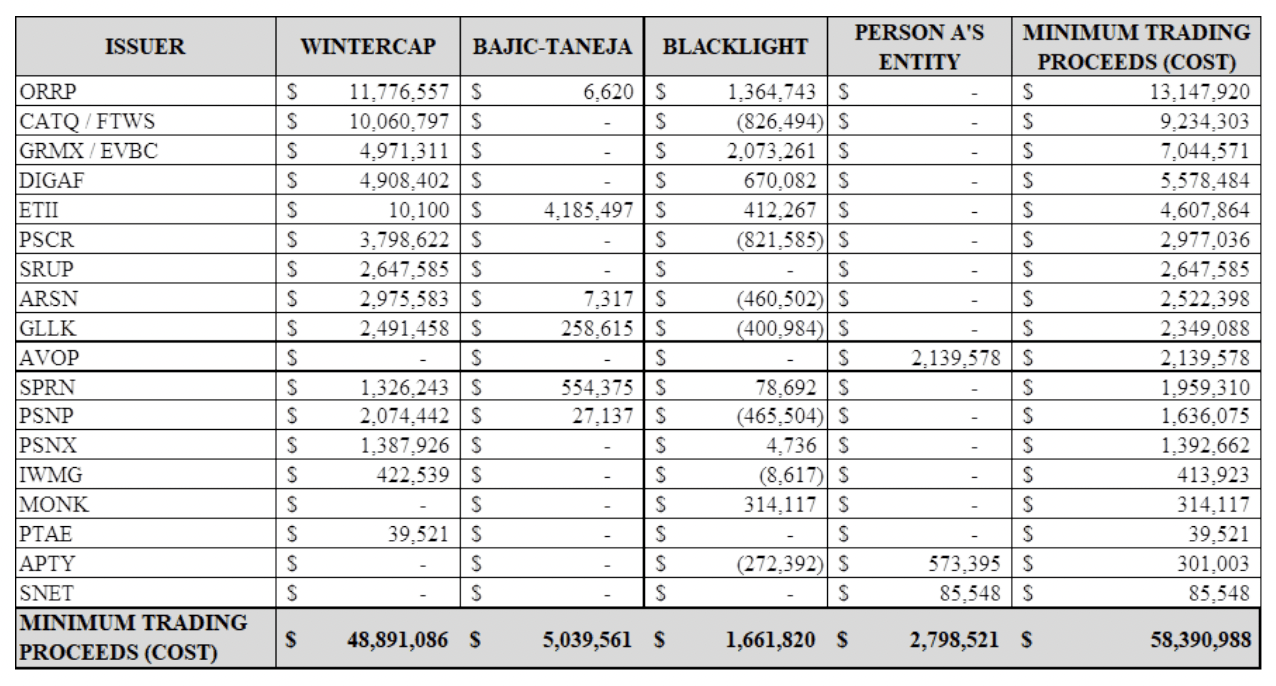 Ciapala was criminally charged along with Ulrik Debo on December 5, 2019 (read more here).

All the above-mentioned individuals and entities tie us to Frederick L Sharp, the alleged mastermind that arranged for his clients to deposit stock in Silverton/WinterCap (Roger Knox) and Blacklight SA (Kenneth Ciapala) to obfuscate the control persons’ association with their public company stock. Sharp was charged by the SEC on August 5, 2021, along with 8 other individuals. In parallel proceedings, on August 4, 2021, the US Attorney for the District of Massachusetts charged Sharp, Courtney Kelln, Mike Veldhuis, and Luis Carrillo for conspiracy to commit securities fraud and securities fraud. Read the FBI Affidavit in support for Sharp et al. here.

Person A, who the SEC discloses was part of a control group involved in promotions done on AV1 Group Inc (AVOP), which now trades as Omid Holdings Inc (OMID), APT Systems Inc (APTY), and SourcingLink.net Inc (SNET), which now trades as Oncology Pharma Inc (ONPH), was later charged by the SEC and by the U.S. Attorney’s Office for the Eastern District of New York for his participation in various securities fraud schemes. Our research suggests that Person A may be Michael J Black. AVOP was one of several entities also promoted by another boiler room run by Ubong Uboh and Tyler Crockett, both charged by the SEC on April 20, 2021. According to that SEC complaint, Michael J Black controlled the entire float of AVOP during the promotion. OTC filings disclosure that Black was also a shareholder in APTY.  Black was charged by the SEC along with Garrett M O’Rouke on July 17, 2019. Black and O’Roule were also named in a criminal complaint by the US Attorney’s Office for the Eastern District of New York on July 18, 2019.

The SEC’s complaint, filed in the U.S. District Court for the Eastern District of New York, charges Alvarez, Biller, Dove, Gran-Brooks and Plaizier with violations of antifraud provisions of the securities laws and charges Alvarez with violating market manipulation provisions of the securities laws. It also seeks injunctive relief, disgorgement plus prejudgment interest, civil penalties, and a prohibition on participating in any offerings of penny stocks by all defendants.